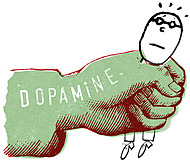 Dopamine addiction is an overlooked problem..  Dopamine is the most addictive substance on the planet, a neurotransmitter produced in our own body.

This TEDx video (Media and Children), by Dimitri Christakis, a pediatrician, parent, and researcher,  shows young mice taking risks after being exposed to TV,  6 hours a day,  for 42 days. The mice continued to take more (potentially life threatening) risks the longer they were exposed to TV.

Long term exposure to specific types of media, especially in young developing brains, appears to corrupt the reward system;  fewer dopamine receptors.  Over-stimulation from media may produce the same effects on the brain as drugs, i.e. heroin and cocaine.  These drugs artificially extracts more dopamine from nerve cells in the brain, requiring more to get high or satisfied over time.   An abundance of dopamine, due to a low density of dopamine receptors, appears to lead to unhealthy risk-taking.  Risk-taking comes in…

Until now, animal studies have never been done on the effects of television. I guess for the obvious reason that animals just aren’t interested in watching TV. This has been a huge disadvantage as animal studies have been essential for establishing that a whole host of things, from abuse, to cigarettes, to lead poisoning, to malnutrition are all bad for the developing brain.

Correlational studies and longitudinal studies have found that children exposed to large amounts of television do worse academically, emotionally and academically. But critics have dismissed these studies as not taking into proper consideration other potential causes (such as poor parenting and/or genetics), with large TV exposure being a symptom rather than a cause.

So what did Dr. Christakis and his mouse study actually find out?