Until now, animal studies have never been done on the effects of television. I guess for the obvious reason that animals just aren’t interested in watching TV. This has been a huge disadvantage as animal studies have been essential for establishing that a whole host of things, from abuse, to cigarettes, to lead poisoning, to malnutrition are all bad for the developing brain.

Correlational studies and longitudinal studies have found that children exposed to large amounts of television do worse academically, emotionally and academically. But critics have dismissed these studies as not taking into proper consideration other potential causes (such as poor parenting and/or genetics), with large TV exposure being a symptom rather than a cause.

So what did Dr. Christakis and his mouse study actually find out?

“Christakis’s mice were divided into two groups, one in a normal environment and one in which the mice were overstimulated. After the first 10 days of the mice’s lives, the overstimulated mice’s cartons were bombarded with audio from cartoons and flashing lights that were in rhythm with the audio for six hours a night. Their mothers also remained in the cartons with them. Then they tested cognition, behavior, and activity in the mice. They found that the overstimulated mice were hyperactive, took more risks, and had learning problems.”

More detail from the Youtube of his TED talk:

“We’ve been building a mouse model of television viewing in my lab. You are now watching Mouse TV. The sounds are from the cartoon network and the lights are basically photo rhythmically generated by those sounds. This is what it looks like, these are the TV lounges here that the mice live in, and they have speakers above and lights around them. And what we do is we start at about 10 days of life and then these mice watch 6 hours of TV per day for 42 days. So basically their entire childhood spent in front of the television which is not uncommon these days for some children even. And then 10 days later we assessed their behavior in a few ways I want to show you.”

“The first test we do measured their activity and risk taking. Now we do what’s called the open field test. Mice have two kind of competing instincts, you’ll see them here. One is to avoid being in the middle of anything because, of course, mice have very few friends and being in the middle of this open field is risky. But of course they have a competing interest to forge for food, so at some point they do need to go into the middle and explore their environment. Now we put these mice in here and test them and we exploit the fact that it’s a white mouse on a black background, and with a computer above we can actually track their movement. And you can see on the left the normal mouse spent most of it’s time around the perimeter. But look at the one your right, notice how much time it spends in the middle but also notice just how much general activity this mouse is actually exhibiting. So this is both a hyperactive and a risk taking mouse….” 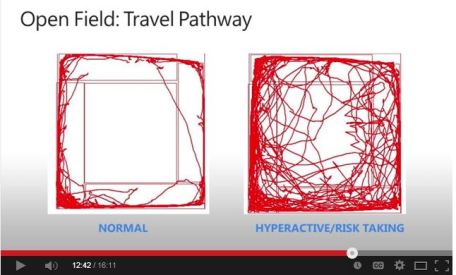 “The next test we do is what’s called the Novel Object Recognition and this tests short-term memory and learning. We put a mouse in a box with two objects. The mouse will explore both of them, get to know them if you will. Then we take the mouse out, and an hour later we replace one object with a novel object. And we see how much time the mouse spends on each object. Now the mouse that is learning, that has good short-term learning, will spend more time on the novel object, and you can see that here. As opposed to the one on the right which spending the same amount of time with both objects. What did we find? We we find that our control mice, our normal mice, spent 75% of their time with a novel object. But look at what our TV viewing, or over-stimulated mice did. The spent the exact same amount of time. It was as if they couldn’t distinguish the two objects or they didn’t care, but one way or another they were not learning, they were not acting like normal mice.” 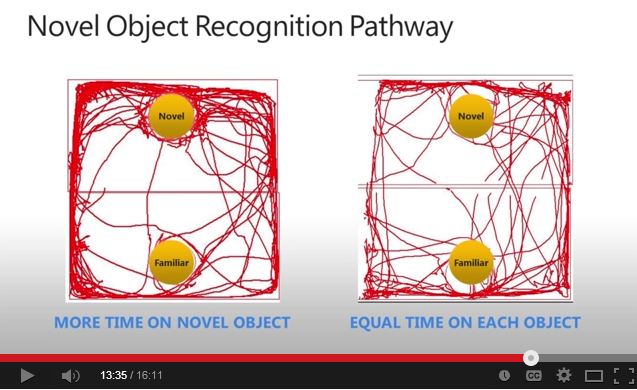 In the TED talk Dr. Christakis described the “The Open Field Test” and the “Novel Object Recognition”, but in the actual study, they also did the “Elevated Plus Maze” and the “Light Dark Latency” and the “Barnes Maze” tests and in all these tests finding significant differences between the control mice and the “over-stimulated” mice.

Dr. Christakis’s TED talk is amazing, and I would urge everyone to listen to it all the way through. Kudos to Dr. Christakis for his brilliant study, and for having the guts to study the negative effects of America’s favorite electronic babysitter.

Update: “The results are startling. “Overstimulating them as babies primes [them] to become hyperactive for the rest of their life,” says Ramirez. The overstimulated mice take more risks and find it harder to learn and stay attentive. They get confused by objects they’ve seen before, for example, and find it more difficult to navigate through a maze. When given the option to dose themselves with cocaine, the overstimulated mice were much more prone to addiction than the control group. These behavioral changes are matched by changes in the mice’s brains.

“The theory is that the same applies to children; overstimulating them with media — particularly in an age of tablets with endlessly streaming, hard-to-ration videos and flashy interactive games — may cause an imbalance in part of the cerebral cortex called the basal ganglia. It’s this part of the brain that allows us to pay attention to critical tasks and ignore distractions. Such overstimulation could lead to problems in later life, particularly with focus, memory, and impulsivity.”

6 thoughts on “Of Mice and TV”